I have bought and gifted 2 T200s and 1 T300 before purchasing this camera. The SonyT500 was launched after the T700 & you thought only Microsoft could have version 6.1 named as 7. Deciding which 1 to buy was quite a tough call. Choosing between 720p HD video recording & 4GB internal memory did make me swing like a pendulum, but in the end the HD factor was something I couldn’t resist. It cost me 20k with a 3 year warranty. Yeah, no gray market stuff.

The Sony T500 is the first HD video recording digital camera as and that is what sets it apart from the rest of it’s predecessors which could only take still images in HD. Here are some images of the camera: 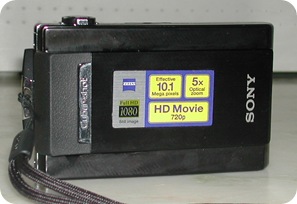 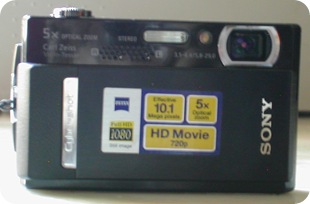 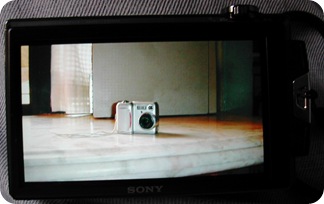 Considering the new feature of taking HD videos, Sony has given a quick access tab to move from still images to videos and the small icons for still & video have a white back-light which looks hot. 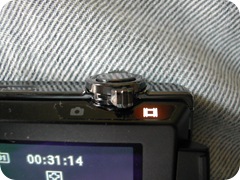 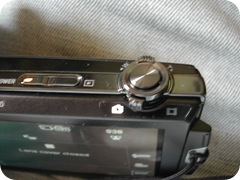 Here are the official specs of the camera:

Now, those are some really good specs. The package contents are: 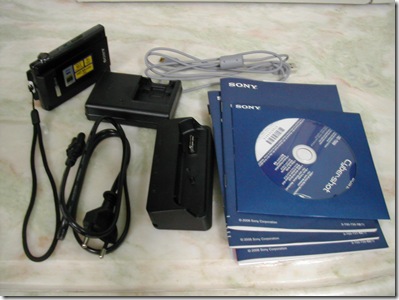 There was no surprise that a HDMI cable was not supplied. The package contents were different from the T200 & T300. The T200 & T300 had 1 cable which had the USB, A/V out all at one end and the camera in at the other, which essentially meant that you would have to carry 1 cable only. This wasn’t the case here. The dock provides the output for A/V; HDMI & PC connectivity along with an AC In.

The AC In, in the dock cannot be used as the respective cable has not been provided, which was kind of sad. Also the fact that now I will have to go around with a dock and 2 cables as opposed to just 1 cable. For transferring images over to the computer too you need the dock. Surprise, you cannot use the dock with the T200/T300 and neither can you use their all-in-one cable with the T500 because the camera slot is of a different size.

Setting it up with the TV was pretty simple, insert the cables, power on the camera and press the Play button on the top. The images looked crisp and the sound playback was also really impressive as opposed to the T200/T300 where I was not able to get sound output from the TV.

The software on the camera also differs from that on the T200 & T300. In the T200/T300 you had clip-arts which you add on the images making them funny, the frames for images that were available were something that I personally liked and miss in this model.

In the T500 you have options to remove Red Eye which works in conjunction with the Face Detection technology deployed across most Sony models; cropping of images; Re-touching which allows you to have a black & white effect around a defined colored circular region in the image. Below are screen-shots of the Retouch option; View Images menu & Grid View of the images: 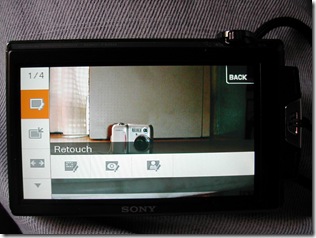 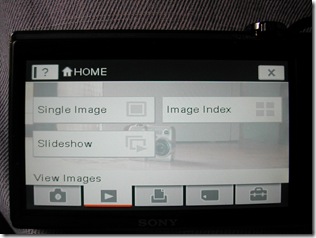 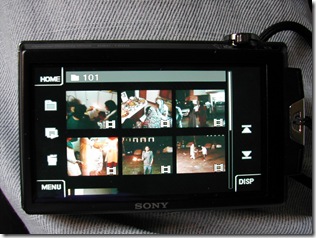 Another notable feature of this camera is that while you are shooting a video you can take 3 still photographs during the video itself. This is a neat and handy feature IMO.

The rest of the features are pretty normal. I love this camera for the fact that it can shoot HD videos with Stereo sound and can take 1080p still images.

The T700 offers 4GB internal memory & a crisper display on the screen. The 1GB supplied in the T500 can shoot only up to ~18 minutes of Fine quality HD video [1. There are 3 modes of video: Fine HD; Standard HD & Fine VGA] which becomes a dampener. The T700 is IMAO not worth spending ‘coz watching HD videos on a HD screen is more awesome than the experience one gets on the small yet powerful 3.5” screen of the camera. The bundled software is pretty decent and gives you a pop-up every time you connect the camera for importing images. Screen shot: 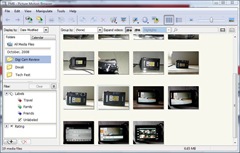 Here are some images that I shot with this camera: