Update: My take on why the Microsoft will be discontinued. 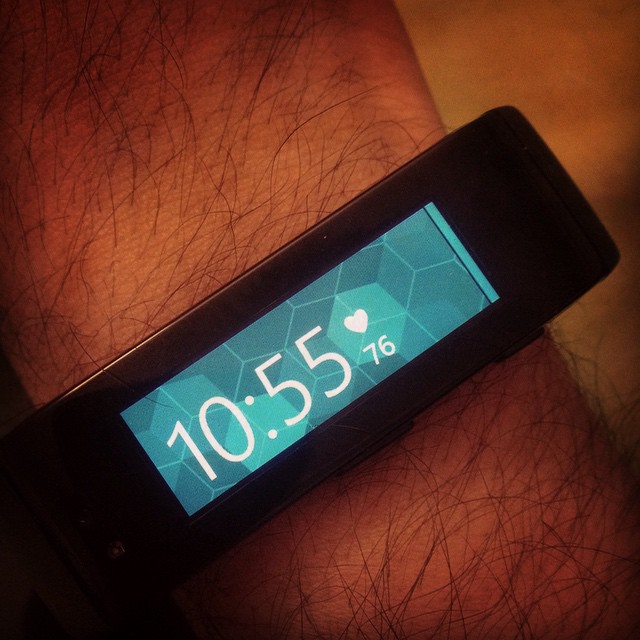 An earlier draft had a lot of words on how very few gadgets excite me anymore given the frequency at which new features are added, and how the Microsoft Band had me sold on it being cross-platform and having a Heart Rate monitor. I deleted the part where I had a friend in NC traveling to NYC grab me one on her way back as chances of getting one on Thursday in NYC were slim to none. I deleted all that as none of that matters as far as the capabilities of the device. [See what I did there?]

I’m a sucker for self-data, that’s the reason I wanted a health tracker. The ones before The Band weren’t exciting as they lacked a Heart Rate monitor. Why do I care about it? Well, shouldn’t I? How many steps I took in a day is a useless metric by any standards. It means nothing. But my Heart Rate, now that’s something that I can use to gauge my on and off workout sessions, as well as know how’s my heart doing.

Microsoft Band thoughts after weeks of use:

It works as advertised: With notifications such as text on the wrist, I have reduced the number of times I take my phone out. This helps tremendously when I’m walking and jogging. A quick glance and I know whether I need to take my phone out to respond or bother with the notification or not.

Payments: The Band has a Starbucks app that allows you to pay at Starbucks through the Band. It works well. The way I see it, the feature is a prototype of the Band’s capabilities. Having your boarding passes show up on the screen is another way the Band can help you limit the use of your phone on the go. Also, having Credit Cards synced with the phone and show up as bar codes to pay at CVS, one can dream, right?

My Sleep is my sleep: This device is all about collecting self data. Sleep, run, walk, etc. I love the Sleep metrics:

Heart Bleed: Contrary to my belief, my client meetings don’t get my heart pumping any more than normal; which is a good thing to know.

Calories, calories, calories: A few months back, I went to a health-doctor(?) who promised to tell me how many calories my body needs to function on a daily-basis. I had a mouth-piece to breathe into for a 15 minutes and that spat out some metrics. My body needs 1200 calories to function. I’ve been told that seems less, but I tend to trust technology so I’ll go with 1200. I set my calorie burn goal as 1400 on the Band, and surprisingly, I easily hit that metric daily with a lot of ease by not doing a lot of activity. The key to weight loss as I’m told is consume lesser calories than you burn and with these numbers backing me, I’m on my way to losing weight. If only I can manage to stop eating fries and pizza.

I haven’t had to use the UV sensor yet, I wouldn’t care to be honest. But the one sensor that really has my attention is the Emotional Stress Sensor. The current hardware of The Band, has one but the software doesn’t support it just yet. At some point, I’ll be able to tell the amount of emotional stress my Senior Manager causes.

The next hardware version should at least be slimmer as this version can’t be worn under a dress shirt with the sleeves buttoned. No way. And if you have to go through TSA, your best bet is to keep your sleeve unbuttoned.