Gone are the days of the CRT, I have been reading about these 2 technologies which are changing the TVs we watch.

I decided to compile this text in which I will try my level best to maintain ease of understanding even for a lay-man & at the end I will also tell you which the experts recommend to buy just incase some of you are planning to buy any of these.

Plasma and LCD displays process the image in a completely different manner. More specifically, there is no relation what-so-ever between the technologies driving these displays.

By definition, Plasma is a state of matter where atoms are ionized by adding energy. In a plasma video display, electricity is used to illuminate a gas stored in miniature cells coated with phosphor.

This technology is based loosely on the fluorescent light bulb. The display itself consists of cells. Within each cell two glass panels are separated by a narrow gap in which neon-xenon gas is injected and sealed in plasma form during the manufacturing process. The gas is electrically charged at specific intervals when the Plasma set is in use. The charged gas then strikes red, green, and blue phosphors, thus creating a television image. Each group of red, green, and blue phosphors is called a pixel (picture element). 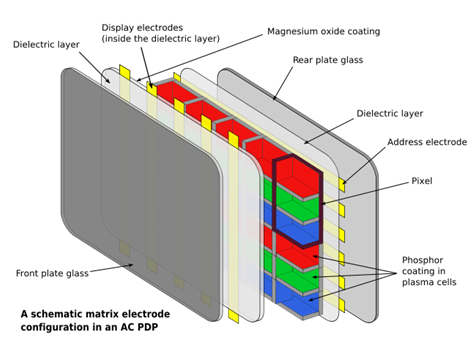 Plasma displays consist of hundreds of thousands of such tiny cells that are positioned between two plates of glass. These cells are filled with neon xenon gas.

Every pixel is made up of three separate subpixel cells, each with different colored phosphors. One subpixel has a red light phosphor, one subpixel has a green light phosphor and one subpixel has a blue light phosphor. These colors blend together to create the overall color of the pixel, analogous to the “triad” of a shadow-mask CRT. By varying the pulses of current flowing through the different cells thousands of times per second, the control system can increase or decrease the intensity of each subpixel color to create billions of different combinations of red, green and blue. In this way, the control system can produce most of the visible colors. Plasma displays use the same phosphors as CRTs, which accounts for the extremely accurate color reproduction.

Simple mathematics show that a typical wide screen panel with a screen resolution of 1365 x 768 pixels would have over 1-million miniature cells.

When a voltage is applied between the display electrode and the respective address electrode, an electric current flows through the gas in the cell – simulating the gas atoms to release ultraviolet photons. This ultraviolet radiation excites the phosphor lining on the inside wall of the cell – giving off energy in the form visible light.

The phosphors in a plasma display are arranged to give off colored light – red, green or blue – to build a color image. As already indicated earlier on, each picture element in a display panel is made up of three sub-pixels – each acting as a miniature light source for one for each of these primary light colors.

Each of these miniature colored light sources blend together to create the final color of the pixel – similar in principle to the way a color CRT builds a color image on the screen. Each of these sub-pixels is energized thousands of times in a fraction of a second to eventually build the final image.

Contrast ratio is the difference between the brightest and darkest parts of an image, measured in discrete steps, at any given moment. Generally, the higher the contrast ratio, the more realistic the image is. Contrast ratios for plasma displays are often advertised as high as 10,000:1.

The ADVANTAGES of Plasma over LCD are:

The DISADVANTAGES of Plasma vs LCD include:

Though the three most common states of matter are solid, liquid, and gaseous, yet some substances can exist in a totally odd state that is a sort of liquid and a sort of solid at the same time.

This means that liquid crystals are neither a solid nor a liquid, even though from a behavior perspective, these are closer to a liquid state than a solid.

LCD screens (liquid crystal display) are in layman’s terms sandwiches made up of liquid crystal pushed in the space between two glass plates. Images are created by varying the amount electrical charge applied to the crystals.

The 2 layers are polarized and “glued” together. One of the layers is coated with a special polymer that holds the individual liquid crystals. Current is then passed through individual crystals, which allow the crystals to pass or block light to create images. LCD crystals do not produce their own light, so an external light source, such as florescent bulb is needed for the image created by the LCD to become visible to the viewer.

Unlike CRT or plasma displays, LCD displays require an external light source to display the picture. Most inexpensive LCD displays make use of a reflective process to reflect ambient light over to display the information. However, computer and LCD TV displays are lit with an external light source, which typically takes the form of built-in micro fluorescent tubes – often a few millimeters in diameter – above, besides, and sometimes behind the LCD. A white diffusion panel is used behind the LCD to redirect and scatter the light evenly to ensure a uniform display.
For an LCD display to show color, each individual pixel is divided into three sub-pixels with red, green and blue (RGB) color filters to create a color pixel. This is somewhat similar to the way CRT and Plasma use different phosphors to glow red, green, or blue to create color.

With a combination of red, blue and green sub-pixels of various intensities, a pixel can be made to appear any number of different colors. The number of colors that can be made by mixing red, green and blue sub pixels depends on the number of distinct gray scales (intensities) that can be achieved by the display.
There are two main types of LCD displays – passive matrix and active matrix.

These LCD displays are simple to manufacture, and therefore cheap, but they have a slow response time – in the order of a few hundred milliseconds – and a relatively imprecise voltage control. These characteristics render images that are somewhat fuzzy and lacking in contrast. Passive matrix LCD displays are therefore unsuitable for most of today’s high speed, high resolution video applications.

Active-matrix LCD display panels depend on thin film transistors (TFT) to maintain the state of each pixel between scans while improving response times.
TFTs are micro-switching transistors (and associated capacitors) that are arranged in a matrix on a glass substrate to control each picture element (or pixel). Switching on one of the TFTs will activate the associated pixel.

The use of an active switching device embedded onto the display panel itself to control each picture element helps reduce cross-talk between adjacent pixels while drastically improving the display response.

LCD TV ADVANTAGES over Plasma include:

DISADVANTAGES of LCD vs Plasma TV include: