A Stalker’s Guide To Foursquare

The attention grabbing headline is for a reason.

As a Foursquare user, I spend quite a bit of my time within the app while I am at a venue, going through specials, tips etc. While having a meal at a restaurant I decided to look at the mayor’s profile and I was able to find out the following information about the person:

Now, common sense would suggest not to mess with her for her boyfriend/brother is most likely a member of the frat house. Coming to the problem though, figuring out this information was very straightforward, I looked at her other mayorships.

Earlier tonight me and my friends were at a pub in downtown Manhattan and my friend looked at the Who’s here list for the venue and he came across a few beautiful people. One of those beautiful people happened to be dancing behind me. I logged into my Foursquare app and was able to determine which department of NYU she went to, where she lived and the cafe where she spent time, simply from the list of her mayorships.

This brings me to something I pinged Dennis about, public listing of mayorships is dangerous and one should have the ability to turn this on or off. Preferably off by default.

For all the girls who read this, (according to Facebook insights, I have no female readers) might want to set their Foursquare as shown below to make it difficult for the information being misused: 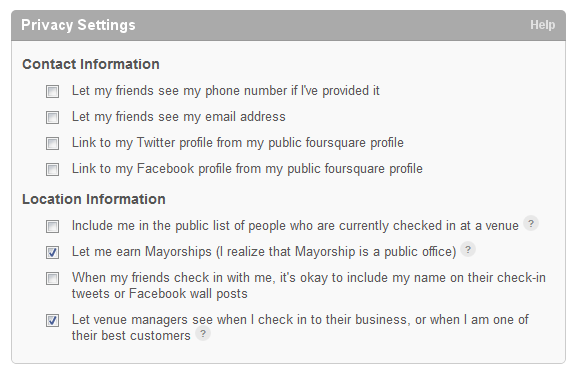 PS: Sorry guys, I understand such information is super powerful as a conversation starter.

PS #2: Without mayorships Foursquare can be less fun so I’d suggest Foursquare to add some visibility switches rather than we having to opt out of the Mayorship feature.