Update 2/2/2021: The Amplifi HD mesh continued to throttle my Internet and the performance was so bad that I had to work with Ubiquity to replace this with the Amplifi Alien.

Setting Amplifi HD was extremely easy, the iOS app made it seamless. The router is also a centerpiece of my living room. The LED base and the live speedometer on the LCD screen always makes me happy. The popular Ubiquity features for building a topology and having a coverage heat map are available.

Early last year I got myself a new Netgear R6700 router to replace the Linksys router that kept dropping my Internet every couple of hours. Unfortunately, as decent as the Netgear reviews were, it is a terrible router — either it couldn’t handle the number of devices I have or it is just a bad router. (I think it’s just a bad router.)

With quarantine’s work from home for 2 people always on video calls, I had to get reliable internet for the sake of my sanity and marriage. I was searching for mesh routers and Brad Sams recommended Amplifi HD. I’ve been reading great reviews about Ubiquity’s products (ref: Troy Hunt on his setup and Scott Hanselman on his Unifi setup) but all their products are expensive and modular, I wasn’t ready for that kind of commitment. Once Brad pointed me to Amplifi, I instantly bought the Amplifi HD Gamer’s Edition because it comes in black (let’s be real, all gadgets look stunningly gorgeous in black). The packaging of this router was great, the hardware itself is as chic-looking and the LCD screen is beautiful. Some pictures of the box: 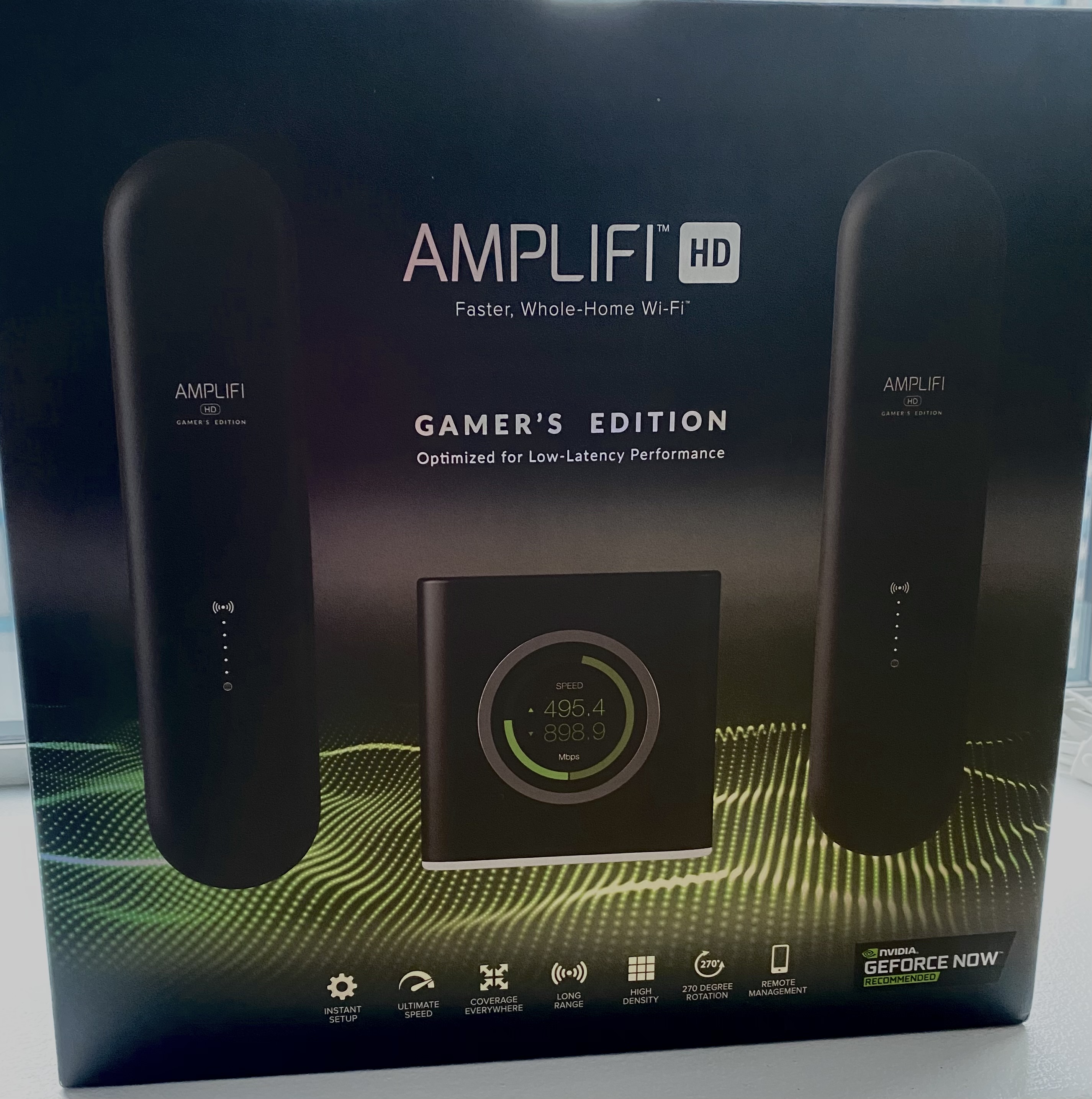 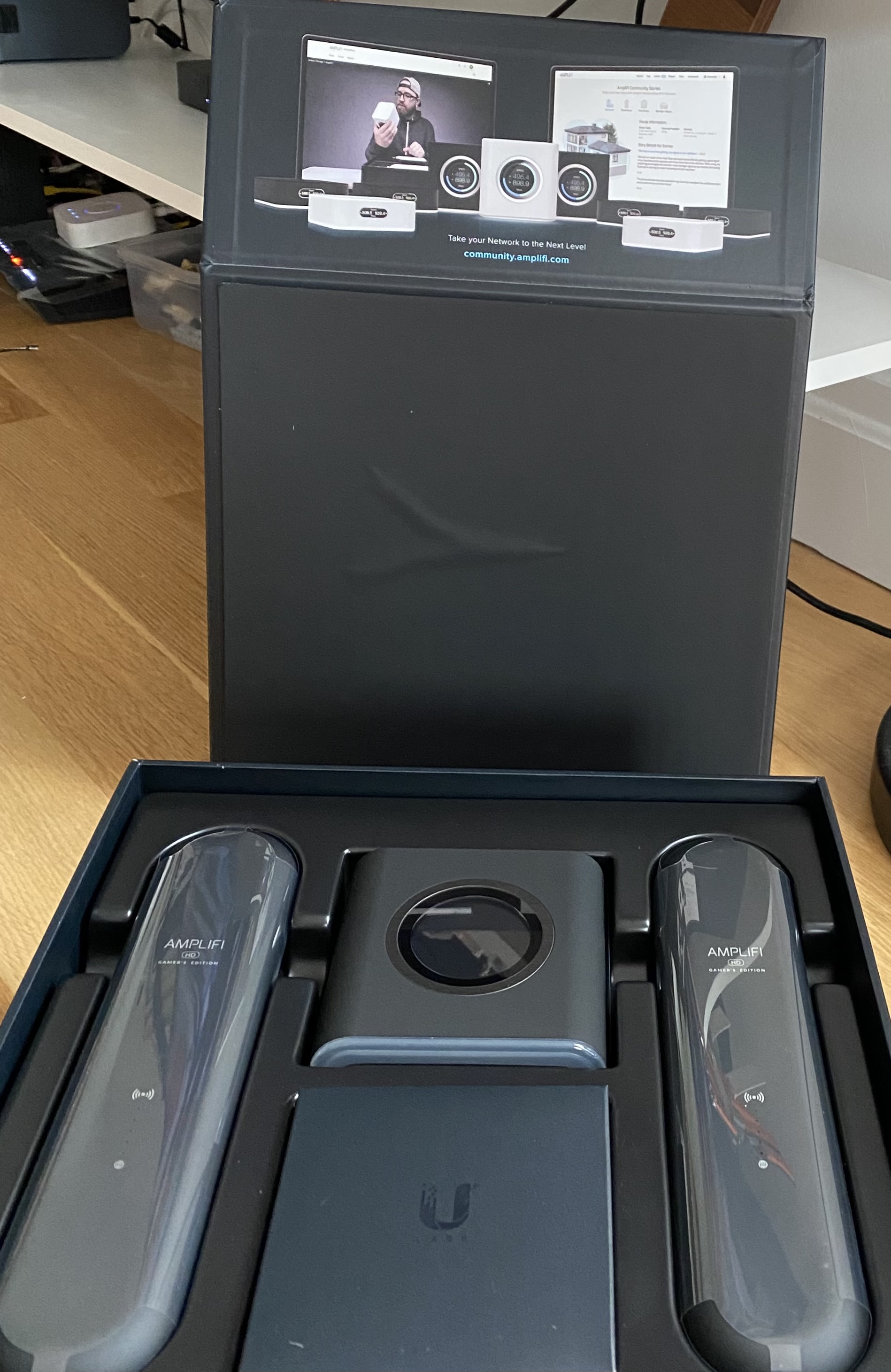 The Good in Amplifi HD:

Once I connected the base station to the modem and power, the iOS app found the router and I entered the SSID / password within the iOS app. That was pretty much all the setup I had to do.

The other Ubiquity feature I’ve seen people talk about is a coverage heatmap and I had to spend some time looking for the “Amplifi” version. After spending some time on the forums, I found Amplifi Connector Beta which requires Remote Management on the router enabled using Google or Facebook login. Since I used a ui.com for Remote Management instead of Google/Facebook, I had to factory reset the router (more on that process below). Eventually, once I got the beta Controller site working, I played around by uploading my apartment floor plan and setting the apartment scale. I edited the floorplan with concrete and dry walls based on my best guess, and here’s what my coverage map look like: 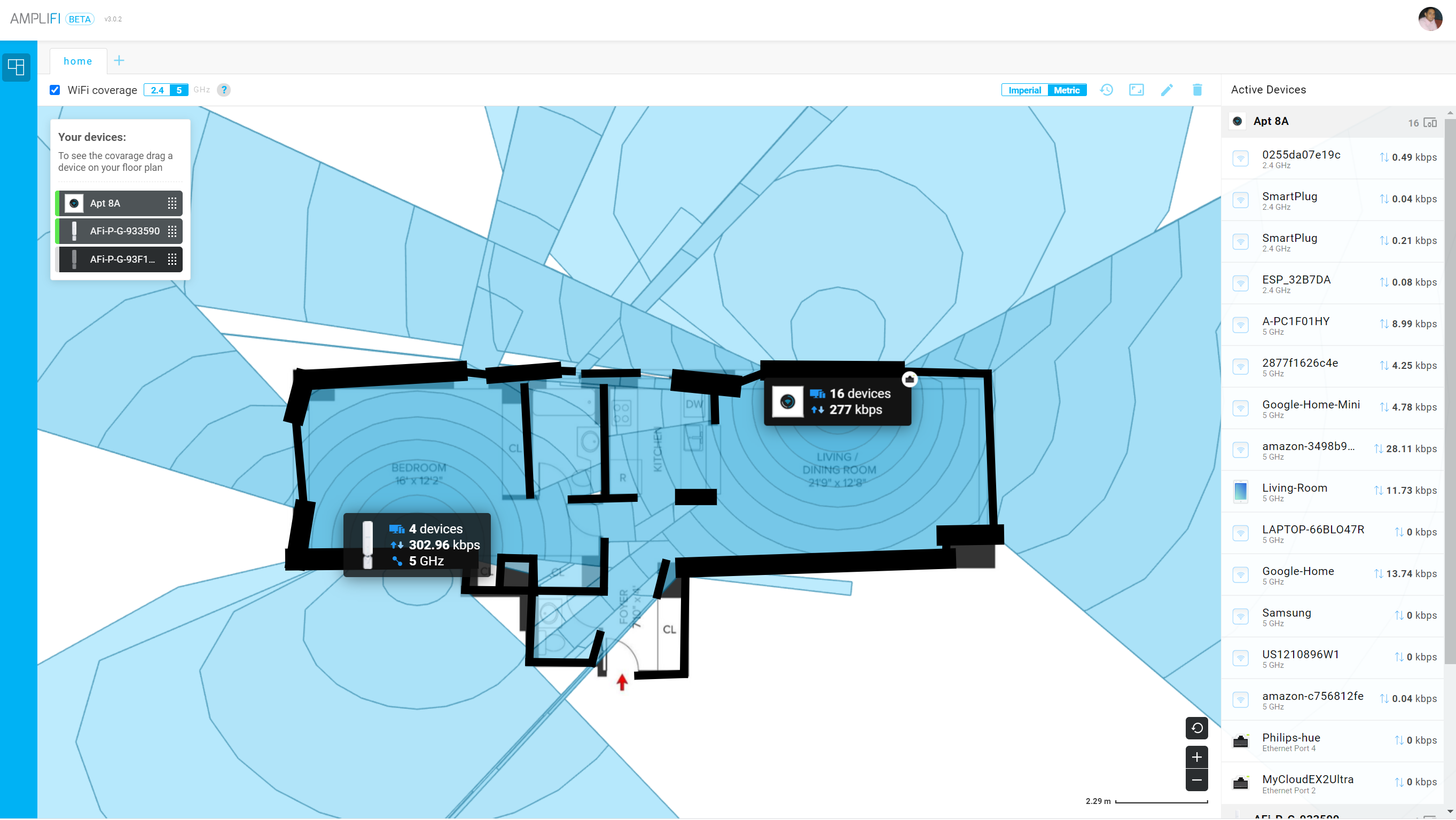 (I don’t trust this visual though because I have no idea the width of my apartment walls, I used 0.54 for concrete walls facing the world and 0.4 for the dry walls indoors.)

I tweaked around the configurations (chose Throughput over Latency because I care about speed). I only setup one MeshPoint because it’s a small house and all my devices have coverage. I kept the router configuration for devices that support 5GHz to work on that band. (Instead of prioritizing connecting to the base station over the MeshPoint.)

The iOS app is intuitive , I really liked the home screen visual:

The base station LCD screen is one of the best things about this device. It has a gorgeous display and an amazing LED light at the bottom. Between the date / time, RJ45 connections, live speedometer, and total data consumed, I have kept the live speedometer — it’s so cool!

Some more pictures of the LCD displays (because, the screen is just awesome!): 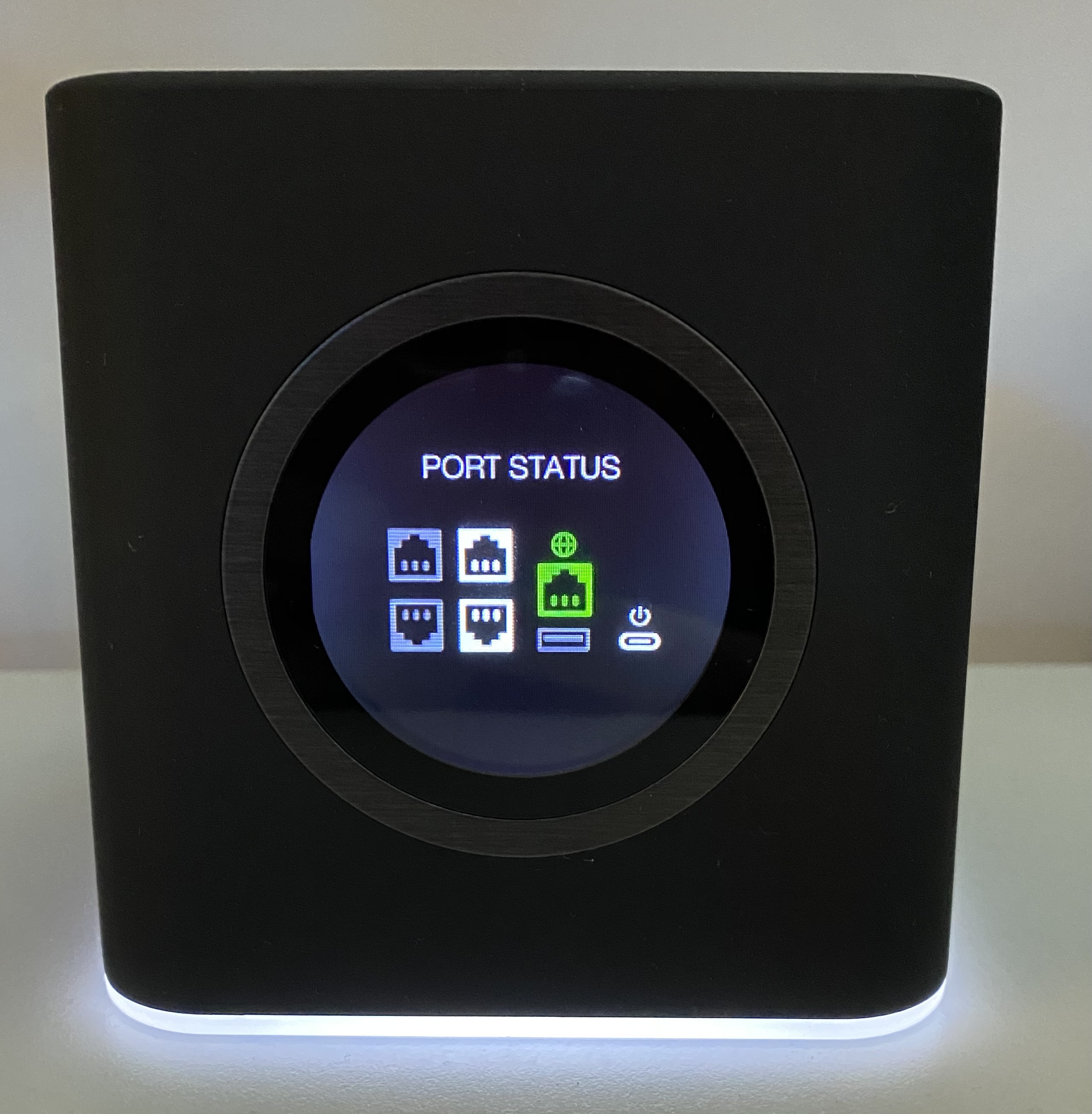 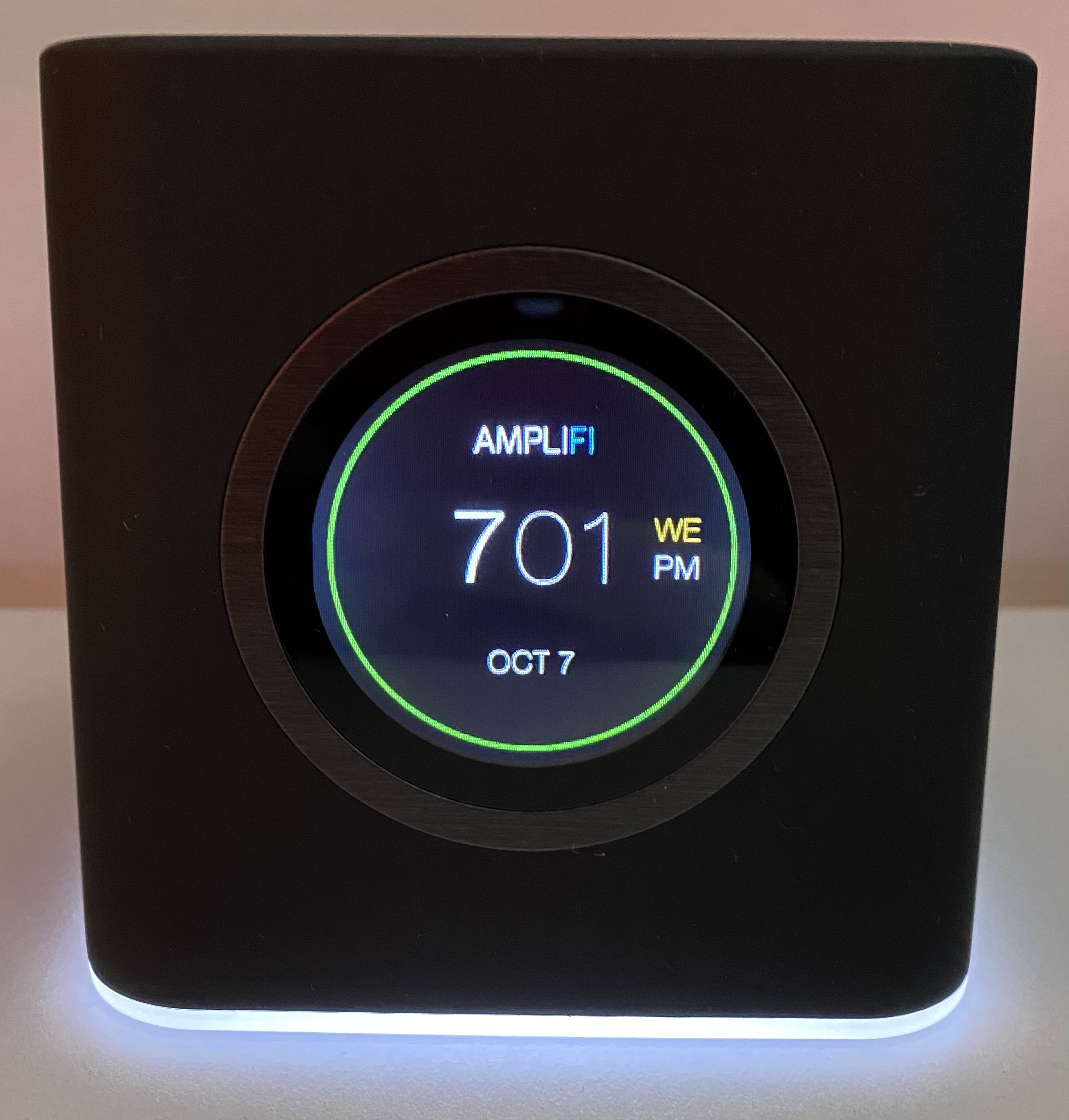 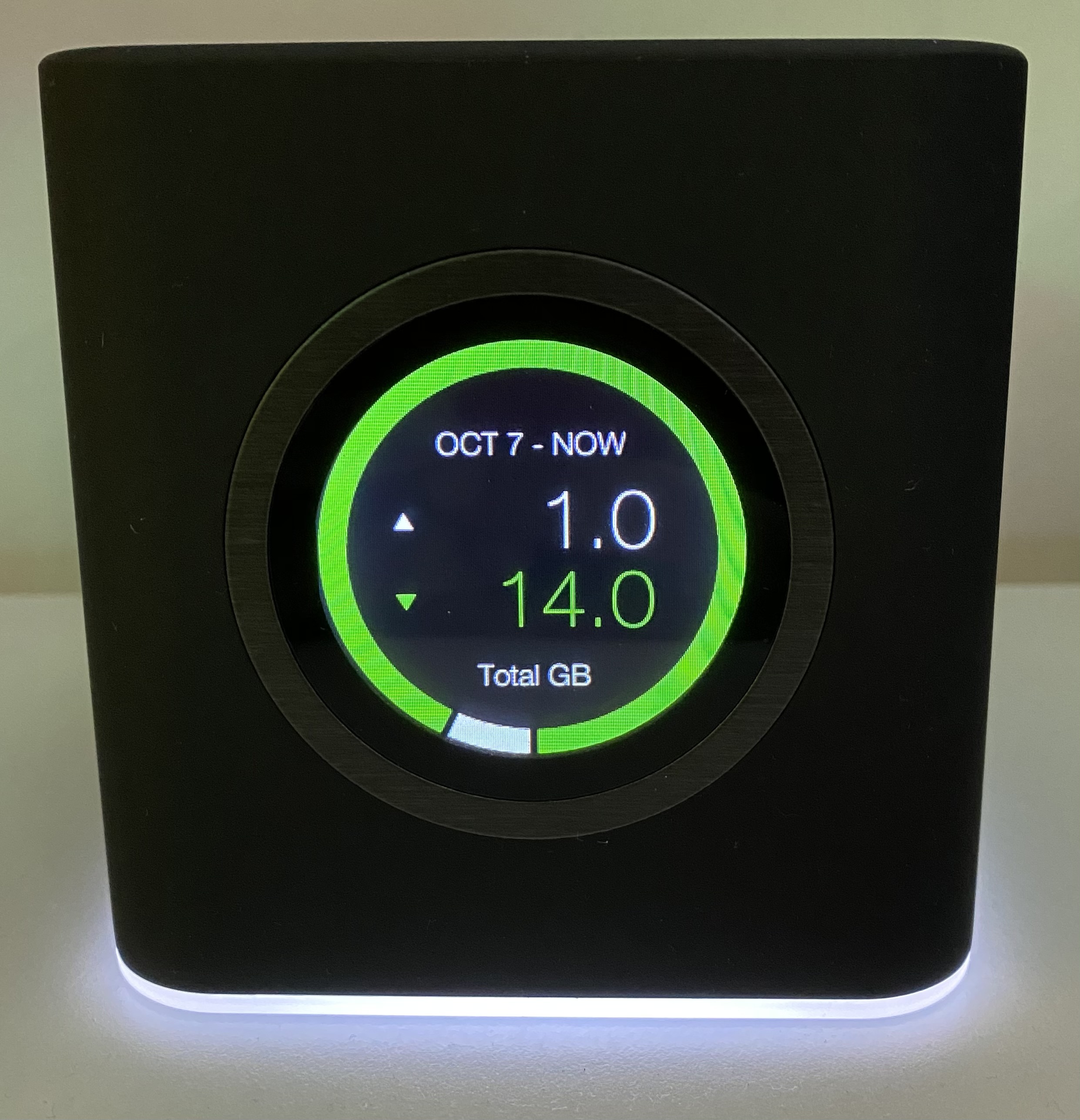 A neat feature I’ve seen every Ubiquiti enthusiast share is their respective network topology and I’ve been wanting a dynamic topology generator. Turns out, Amplifi products do support that. Here’s how you access Amplifi network topology:

Oh, and here’s my network topology: (It’s such an amazingly neat feature!)

The app provides some decent per device information (although it doesn’t show cumulative data over a period of time on the device, only real time tx rates):

Honestly, I didn’t expect that I’d be testing this feature so soon but to try the Controller Beta feature, I had to factory reset so I could change the Remote Management authentication from ui.com to Google. This process required me to do the following in this sequence:

Once I did all this, within a few minutes, my network was back to normal. None of my devices had any issues reconnecting, everything just continued as if nothing had happened. It was one of the nicest user experience I’ve seen.

An unknown capability included for free is the teleport VPN. Basically, I get connected to my home router and Internet for VPN. The additional feature that this allows me is letting me access my local network remotely. I haven’t tried this given I’m mostly home and most of my home devices are accessible over the Internet:

The Bad in Amplifi HD:

The 2 negatives in mind are:

The Ugly in Amplifi HD:

On finishing  reconnecting all my devices, I started running some speed tests. And started noticing issues. My current Internet plan is 400Mbps from Spectrum and as such I was expecting at least 250-300 Mbps every time I ran the test on any of my 5GHz devices. Unfortunately, that is not the case. Here are the speed tests from the various devices:

I started researching the issues and the good news is that I’m not the only one; the bad news is that there’s no reliable solution/support answer. Ubiquity support told me that the speed test feature within their app is not reliable (well, if it isn’t reliable, remove it). They’ve also suggested tweaking the wireless channels — none of that has helped. While this lack of consistency and optimum speeds bothers me everyday, it hasn’t impacted our day to day so far — no buffering, no pixelated videos, and no connection drops.

I even had the Spectrum technician come over and their modem correctly showed ~300ish speeds, so I’m here with no clarity on why I’m getting these inconsistent speeds.