Get Your RSS As IM In Google Talk

Contrary to what the ‘oh-so-great’ pundits of the Internet think, I have a forecast of my own – RSS will die the day WordPress drops support for it, till then it’s here to stay. I follow over 100 blogs and use Windows Live Mail as my RSS reader, though Google Reader offers the convenience of being able to follow ones feeds from anywhere with a net connection, I don’t like the interface, I’ve talked about the pros of Windows Live Mail as a RSS reader in this post.

One of the basic problems several ‘pundits’ have is RSS is served as email which is not how it should be, according to them.

How do you want it then? Only the headline with a link to the article? Something like AllTop perhaps? Or a twitter account of the website only giving titles and links? That doesn’t kill RSS as a technology because both alternatives above use RSS as their back-end.

While true, following an author for his articles comes along with a lot of other tweets, some might argue having separate twitter accounts for the blog, that’s backed by RSS and more often than not, by twitterfeed, which has it’s own delay between pinging websites and uses RSS as well. So, STFU would be my reply.

The way I follow what people are writing is well, Twitter Lists and Windows Live Mail. WLM downloads my RSS and I can read it at my convenience and twitter lists of a handful of people when I don’t have access to a PC and am using my phone, as a result, Google Reader’s USP is negated. The problem with these ‘pundits’ is that they use Google Reader and have so many feeds that they’re frustrated while reading them and since on twitter they only follow a handful of people the amount of clutter is far less, not to mention Google Reader’s interface is very intimidating and sucks monkey balls.

While Twitter Lists and Windows Live Mail work fine, I came across a service that will push your RSS feeds as an instant message via Google Talk or a Jabber/XMPP client, for those ‘pundits’ who a) want only the link and title b) don’t like RSS being served as email. Now rather than setting this up for individual feeds, you can create a folder of feeds you want to follow on Google Reader and use the RSS URL of that folder, much more convenient. How to set it up: 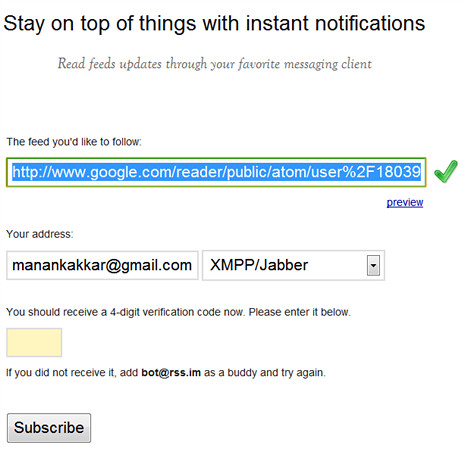 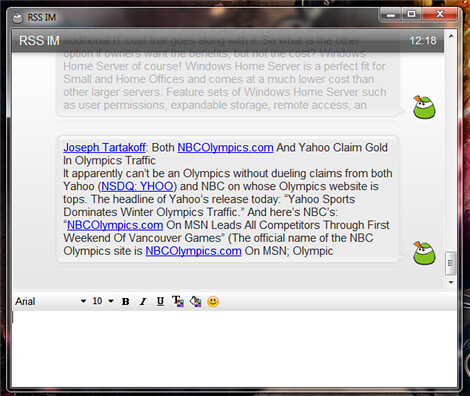 Get your feeds with a link and the description as IM messages, I hope the ‘pundits’ are happy now. Instant and unlike email :)

Update: You can also try Notify.me, does the same but has more. Thanks to Aniket for the tip.