Previously I had dug out an old video showing a working prototype of Microsoft’s tablet (of the future) – The Courier, the prototype was named Codex. Engadget today got hold of new images showing the UI of the Courier. The images look amazing, of course whether the actual product is every bit as good remains to be seen. One of the images Engadget has shows the Courier displaying SMS messages and Facebook status updates. Image: 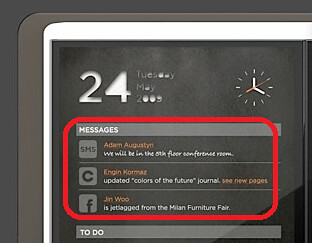 The Courier will definitely have Internet connection capabilities, the images indicate towards 3G and ability to insert a SIM card, making calls might also be possible for all we know. Some details about the Courier known by Engadget:

You can watch the prototype in action here.