If you were living in an alternate universe you must’ve missed Microsoft’s big reset with regards to their mobile platform. Microsoft announced the Windows Phone 7 series yesterday at Barcelona, Mobile World Congress. From the scratch in terms of their phone strategy, Windows Phone now builds on the Zune UI. With a horizontal scroll compared to the traditional vertical as the main UI control. Steve B knows the importance of developers in the software ecosystem and has done a lot to attract them, Windows Phone’s success depends on them as well. The iPhone’s success can be pinned on the success of the App Store.

Microsoft has been in the dilemma of whether to promote the Windows Mobile marketplace or the Zune App Store so long, not anymore. With Windows Phone 7 Series there’s a single App Store for the mobile devices and while JoeB did not talk about the Marketplace, screen shots by Engadget, it is clear that Microsoft is going behind the iTunes App Store developers to jump on the Zune App Store bandwagon.

The screen shot shows Flight Control which has been a top seller on the iPhone App Store is coming to the Zune Marketplace. Screen shot: 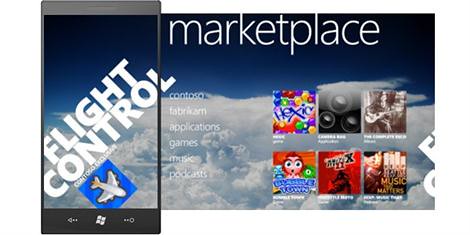 I’m fairly certain that Microosft has roped in quite a lot of top developers on the iTunes App Store to code for the Zune Marketplace and Windows Phone.