Steve Ballmer is on Twitter and has 818 followers with no avatar. During his talk at Kiev Polytechnic Institute in Ukraine Steve Ballmer said that he was present on twitter but private. He then went on and tweeted with his Windows Phone 7 device. Searching twitter for the tweet mentioned in the transcript led me to @SteveBMicrosoft who has 4 tweets, 800+ followers and no avatar.

SteveB tweeted that he loves the Kiev Institute and this tweet has been retweeted by several users. The tweet: 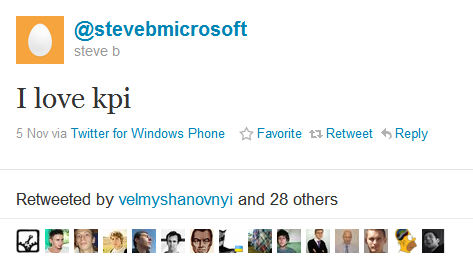 Hey, Steve you might want to get an avatar and please don’t have a Kevlar vest.