Stats: Transition From Explorer To The Browser Is Here

I’ve been using Wakoopa for a very long time (Explorer usage dates from 29th July 2008) so the data it has is quite indicative of my computing over time. When Google announced the Chrome OS tablet everyone, including myself, was amused. The idea of using just the browser seemed absurd. What happens to the mail client, what about Photoshop, what about my tons and tons of music, my movies, saving documents on the disc, what about traditional computing?

When I looked more into Wakoopa’s overall stats for Windows, breaking the top 25 apps used gives an interesting picture:

This leaves Remote Desktop and Visual Studio. The point being, most of what we use our desktop for can be done with widgets and in the browser too. This to a large extent validates Google’s vision with Chrome OS. No native storage maybe pushing it a bit too far since Internet isn’t ubiquitous today – high prices and choppy service.

Rumor has it that Apple is planning to merge iTunes and Safari, which I believe could be a great idea. I already use my browser all the time, spend time on Pandora and Youtube why not have a media tab that tabulates my media?

The most used desktop application for me has been the web browser. Based on the stats, I’ve used Chrome, Safari, IE and Firefox considerably. Suffice to say I spend a lot of my time with the browser, with several tabs open, resulting most of my computer’s resources (CPU+memory) dedicated to the browser. Running another app Silverlight or Adobe AIR makes little sense since both platforms are memory guzzlers. 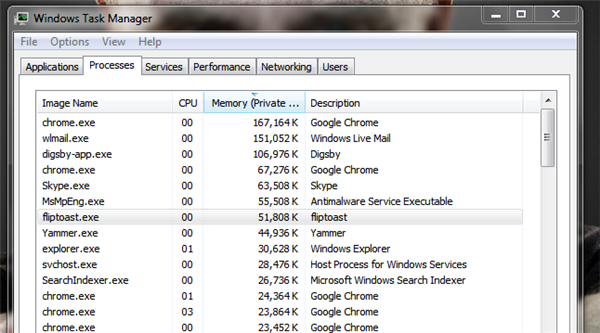 Having apps on either platform running alongside my browser affects the system performance. So why have separate apps when the web UIs are fairly useful?

PS: The stats for Mac aren’t that different either.