Ubiquitous connectivity allowing access to data over cloud using computers everywhere that have more natural user interaction and pervasive displays, with location aware services is what I conclude from the slide above. The wide array of Microsoft services and products that can offer this experience doesn’t include Zune: 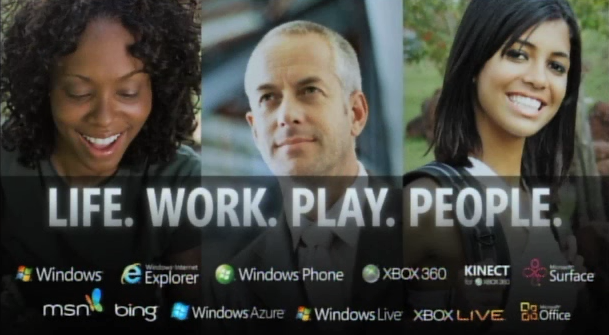 “TV means 2 things it is a form of content and a device in your living room. These two things are coming apart.”

He probably hinted at the use of mobile devices to access the living room content anywhere. Several months back, during a demo the Xbox Live team showed a virtual lounge where user avatars sat together and watched live television, while the users weren’t in close proximity physically. In another comment Steve B said he sees innovation in television devices as well as content. According to him social networks, video games and TV programs will come together to provide a new experience for consumers in terms of content. Here’s a video of Steve B on stage at Imagine 11: