Earlier today, Steve Ballmer did a webcast from the Washington University where he talked about the Cloud, Steve B talked about Microsoft’s cloud strategy and the parameters defining the same (Todd Bishop at TechFlash has them). Two demos done at the talk are worth sharing. Some time Robert Scoble had seen a demo of World Wide Telescope and he said that it made him cry thinking about the potential something as slick as World Wide Telescope could have. Microsoft engineers have integrated World Wide Telescope with Bing Maps and a bit of Silverlight mojo has resulted in some pretty jaw dropping application. Being able to go into a “First Person Imagery” mode, look up right into space is amazing. I’d rather let Blaise Aguera in this video do the talking:

This technology was first shown at a TED talk and was well received across the Internet.

Pretty cool how technology works: Microsoft using a Yahoo service to pull images that are published using an Apple product.

The other demo was of Xbox Live as it is in the UK. And boy this is how I want to watch television. Microsoft has a tie up with Sky network to provide content and live television over Xbox and Xbox Live, broadcasting content isn’t where Microsoft stopped, with Xbox Live you can view the same channels your Xbox Live friends are watching with them in a virtual drawing room on a huge screen. Again, I’ll let the video do the talking: 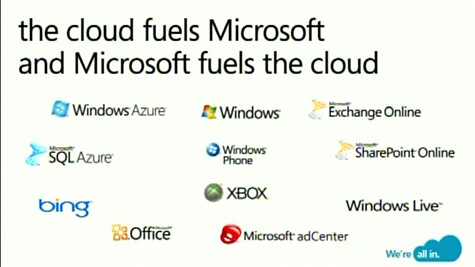