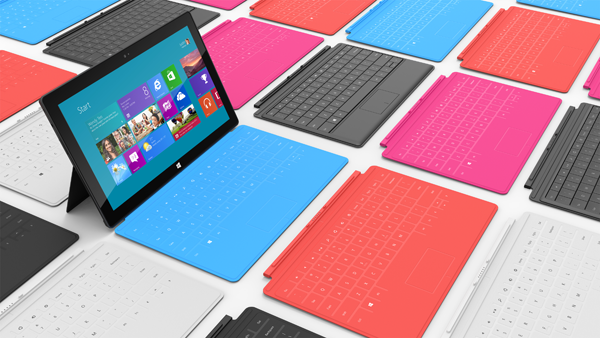 For those who have been following me on Twitter, I have been sharing my thoughts about the device and where it fits in the Windows ecosystem. I’ve been working on a piece but couldn’t figure out how not to make it a rant against analysts and Apple apologists. Harry Mccracken is a reputed technology writer and he was at Microsoft’s event, he raised several questions, answers to which would’ve been part of my original piece so I decided to answer his questions instead. Here goes:

Given the amount of time spent on talking about the keyboards, it better be good. In many ways, the keyboard is what separates the Surface from the iPad and the several shitty OEM tablets shown so far. At Computex 2012, OEMs showed what they had planned and none of them had a keyboard that I can actually carry with me.

The one interesting thing about the keyboard is that it features buttons for Windows 8 Charms, so when you are using the keyboard you don’t need to touch the screen or use the pointer to access those features.

The keyboard is a part of the device as it is the cover itself. It’s the smarter cover.

2. What’s the deal with the touchpad?

To understand this we need to look at what Windows 8 is—it’s a transition OS trying to move away from relying on pointer-based interaction to a more “natural” mode of interaction.

In Windows 8 ARM, Office still goes back into the desktop mode. We are more comfortable with the keyboard & mouse for Excel, Word and PowerPoint which means having to use the keyboard and touch screen for Office would’ve been a HCI disaster.

In Windows 8 Pro, well the damn thing is Windows that runs all legacy desktop apps. Saying we don’t need a mouse for those custom built enterprise apps or regular PC apps is plain stupid at this point. I work in a company where everyone uses PCs for work, the iPad can’t replace those PCs. These are ugly, data entry, custom apps. Like the ones used in all companies.

A mouse and keyboard is still the most productive way of interaction since moving away from this has a huge learning curve.

3. Is anyone going to use these without the keyboard?

Yes. This depends on what is being done at what point of time in the day. As I talk above, if you’re performing an Excel or Word intensive task, the natural instinct is to use a keyboard/mouse.

However, if you’re watching a movie on Netflix or browsing the Internet on the move, you don’t need the keyboard at which point, it remains as the cover and snaps at the back of the device.

4. How well will Windows work on a screen that small?

Small screen? It’s a 10″ screen and Microsoft has been showing Windows 8 on tablets since they’ve unveiled the Metro UI. Harry, you haven’t been paying close attention to Microsoft.

Anyhow, here are some reference posts for screen:

I was at BUILD but not cool enough to get some alone time with the device but I tried it and the screen was NOT an issue.

Good question. While Microsoft not talking about this does raise questions we need to take another history lesson here. Microsoft has talked about battery and Windows 8 in at least 3 lengthy articles. Here are some excerpts that should put things in perspective:

For Windows 8, we started off with a rule that would apply to the large majority of Metro style apps:  if an app is not on screen, and the screen is not on, it should not impact your battery life.

Maximize performance. We wanted media playback to be fast and responsive, enabling the full power of the hardware while maximizing battery life on each PC.

Now all this text doesn’t mean the battery life will be great in practical use but with the focus on battery, it will definitely be better than Windows 7 laptops. Unfortunately, the Surface specs shared by Microsoft list the battery in both Surface tablets as less than the new iPad.

PS: If the battery sucks on this, shame on you Microsoft for lying.

6. What’s the deal with wireless broadband?

This is an interesting one and I believe Microsoft does not want to deal with carriers and keep the costs down. Also, statistics backed them on this one, for at least the first iteration.

7. How are HP and Toshiba and Dell and Acer and Sony feeling right now?

They should be ashamed.

The topic of OEMs is an interesting one since Microsoft’s business model with Windows has been OEMs building devices. But, Windows 8 is different. As Steve Ballmer said during the presentation, Microsoft had to do a mouse to provide direction for OEMs, this tablet is meant to be a reference model, and more.

The OEMs showed nothing worthwhile at Computex. In fact everyone who is shouting so loudly about OEMs has in the past only gone on to slam the OEMs for their crappy devices. I tweeted the following regarding OEMs:

let's face it, OEMs showed the best of what they could do at Computex 2012 & all their tablets were comprising crap. Surface isn't. #fb

OEMs can either create a value proposition for themselves by using W8 & innovating or implode, like HP & webOS or RIM & QNX.

everyone so shocked about the OEMs, stop. HP is in shambles, Dell knows shit about tablets, Samsung is doing Android, HTC isn't doing W8 tab

Now, Microsoft is NOT undercutting OEMs as some might lead you to believe. The Surface has left ample opportunity for other OEMs to innovate. OEMs need to sell devices that run Windows for their business. They cannot rely on Android since, well, Android sucks and the OEMs end up paying Microsoft anyway!

Adding cellular cards, higher resolutions and distribution are three from the top of my head. Microsoft will only sell the Surface through Microsoft Stores and online in some countries.

8. What will other hardware makers’ Windows 8 machines be like?

Like the iPad, existing Android tablets and their Windows 8 tablet prototypes. There are only so many ways you can design a tablet—it has to be a rectangular device.

9. Will Microsoft be happy or sad if other PC companies out-Surface the Surface?

Happy. Microsoft needs to sell Windows 8, not Surface—if anything this is the takeaway from this post. OEMs have been making several half-hearted attempts at Windows 8 tablets. They have one foot out of the door with Android and in such a case one will never come up with a compelling Windows 8 tablet.

Microsoft can fall back on their hardware design team and supply chain to pump the market with Windows 8 tablets while OEMs figure their strategy.

10. Is Microsoft going to keep this up?

No. The purpose of Surface isn’t for Microsoft to become the next Dell or Vizio.

12. What about that Kindle Fire-type tablet?

This will come from B&N. What edition of Windows it will run is still unanswered but it doesn’t look like Microsoft is interested in doing this.

13. Is there any chance at all that Microsoft will become the dominant maker of PCs?

It’s not going to happen immediately.

And probably not in the near future. With Surface, becoming the next Dell is NOT Microsoft’s goal. I’m sure Harry knows this.

14. What does this mean for the Microsoft Store?

Only good things. People now have another reason to visit the stores and for the consumer, we have a place to see what Microsoft has to offer and what others have to offer.

15. What does this mean for Best Buy?

But it can’t be happy about the prospect of being denied a significant PC.

Disagree. For one, Harry just called Surface a “significant PC” and secondly, Surface isn’t the only tablet to sell. How many Android tablets has Best Buy sold? And how many people go to Best Buy over an Apple Store to buy an iPad?

16. What does this mean for Apple?

This move is not meant to target Apple, it is meant to inspire OEMs and for Microsoft safeguard Windows 8 in the market.

17. What does it mean for Ultrabooks?

A question only time will answer. One thing is certain though, Ultrabooks won’t die the quick death Netbooks suffered.

The keyboard and pen in the Surface make a compelling reason to give up an Ultrabook but the Ultrabooks will continue to have the advantage of specs.

18. Where does this put Android?

OEMs need to realize that they can offer competent products with Windows 8 and that’s where they should concentrate. Android tablets have been a disaster and OEMs end up paying Microsoft. The interest Surface has generated and the popularity of Windows and the enterprise market, Android shouldn’t be a focus.

19. Does any of this mean much without killer Metro apps?

No. We need apps and as of now, the unreleased Windows 8 has more apps than Android tablets. “Killer apps” remains to be seen.

Yes. When Bill Gates announced the tablet PC, he was ahead of his time. We did not have the engineering expertise nor were materials available at the price they are today. However, it is obvious that this is what Gates hoped to achieve back then.

21. What if Microsoft had begun work on all this a half-decade earlier?

It wouldn’t have mattered. The components and technology needed just weren’t there to make this a household mass production device. While Microsoft had the idea first, Apple made it mainstream enough to drive prices down and generate a demand that compels ecosystem participants to offer such devices.

22. Will Surface eliminate the distinction between PC and tablet?

Yes. And that’s what Windows 8 is all about. Refer to answer #2

23. What are your thoughts on Surface?

The device will be available somewhere around October.