After my previous article showing the difference between a PowerPC based Mac and IBM PC, I was compelled to research again, so here I am again compiling another article from the Internet trying to understand a very complicated topic in simple terms.

Like always in this article too attempts to make it as laymen possible have been made.

Also, I may not be absolutely accurate at some places which can be corrected.

What is the difference between Unix and Windows?

The difference is at the core and the way the core functions thereby everything that follows also behaves differently.

The core of an OS is known as Kernel:

The kernel is the central component of most computer operating systems (OS). Its responsibilities include managing the system’s resources and the communication between hardware and software components. As a basic component of an operating system, a kernel provides the lowest-level abstraction layer* for the resources (especially memory, processors and I/O devices) that application software must control to perform its function. It typically makes these facilities available to application processes through inter-process communication mechanisms and system calls.

The Computer system consists of 5 abstraction levels which are:

The kernel does this: 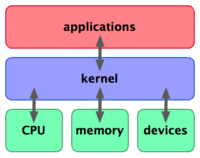 The kernel allocates memory, keeps track of the physical location of files on the computer’s hard disks, loads and executes binary programs such as shells, and schedules the task swapping without which UNIX systems would be incapable of doing more than one thing at a time.

Now something about the Windows Kernel:

Some more difference between UNIX and Windows:

Everything in UNIX is treated as file (even the hardware devices like printers, scanners etc!) but it is not the case in Windows, also

In Windows, a dynamic-link library (.dll) file has no dangling references. Instead, an access to functions or data goes through a lookup table. So the DLL code does not have to be fixed up at runtime to refer to the program’s memory; instead, the code already uses the DLL’s lookup table, and the lookup table is modified at runtime to point to the functions and data.

In Unix, there is only one type of library file (.a) which contains code from several object files (.o). During the link step to create a shared object file (.so), the linker may find that it doesn’t know where an identifier is defined. The linker will look for it in the object files in the libraries; if it finds it, it will include all the code from that object file.

In Windows, there are two types of library, a static library and an import library (both called .lib). A static library is like a Unix .a file; it contains code to be included as necessary. An import library is basically used only to reassure the linker that a certain identifier is legal, and will be present in the program when the DLL is loaded. So the linker uses the information from the import library to build the lookup table for using identifiers that are not included in the DLL. When an application or a DLL is linked, an import library may be generated, which will need to be used for all future DLLs that depend on the symbols in the application or DLL.

Unix possess the process hierarchy. When a new process is created by a UNIX application, it becomes a child of the process that created it. This hierarchy is very important, so there are system calls for influencing child processes. Windows processes on the other hand do not share a hierarchical relationship. Receiving the process handle and ID of the process it created, the creating process of a Windows system can maintain or simulate a hierarchical relationship if it is needed. The Windows operating system ordinarily treats all processes as belonging to the same generation.

UNIX uses daemons, Windows has service processes. Daemons are processes that are started when UNIX boots up that provide services to other applications. Daemons typically do not interact with users. A Windows service is the equivalent to a UNIX daemon. When a Windows system is booted, a service may be started. This is a long running application that does not interact with users, so they do not have a user interface. Services continue running during a logon session and they are controlled by the Windows Service Control Manager.

I have some things that I want to cover but that require a little more research and time.

Source: The Internet
PS: A little something I found: List of Viruses for Linux.