If you’ve missed, the top buzz around Windows 7’s leaked RC (build 7100) is on the XP Mode & gaming performance. ZDNet did an article where the charts clearly show that there’s hardly any difference if any between Win 7 RC & Vista SP1. The benchmarking was done on various GPUs & games. One of the graphs from the test: 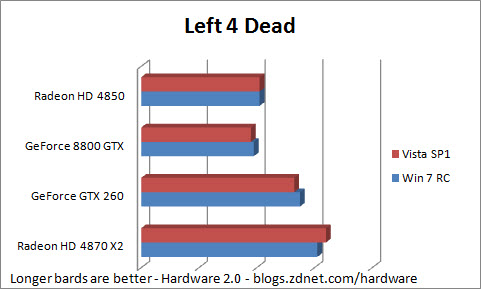 The difference is negligible. Same was for the other games. However, some hours back, Microsoft on the Engineering 7 (E7) blog published an article dealing with Windows 7’s graphical performance & towards the end mentioned as to why we see no difference:

In comparing Windows 7, we would encourage the comparison using Windows Vista SP1 and keep in mind the difference you might see in WDDM 1.0 v. 1.1 and that the 1.1 drivers are still under development.

In effect they are trying to say that you should wait till WDDM 1.1 matures? :|

WDDM is just a new display driver architecture supported in Windows Vista and later systems. Device manufacturers develop the hardware drivers within this architecture. However, the performance of these drivers depend on the design of the driver developments, but not WDDM. Therefore, the WDDM 1.0 driver works better than the WDDM 1.1 one.