UPDATE: Office Beta leaked build 1004 & 1006 (so will 1009) have the option to add status updates, this option can be accessed when you create a new email message, it’s at the bottom of the screen: Well, not really sure but if a tweet from Microsoft Office’s official twitter account is to be believed then, your inbox (which is definitely Outlook) might be integrating with some social networks. Live.com does this, there are 3rd party solutions that let you tweet from Outlook. But, this sounds fun. Here’s the tweet: 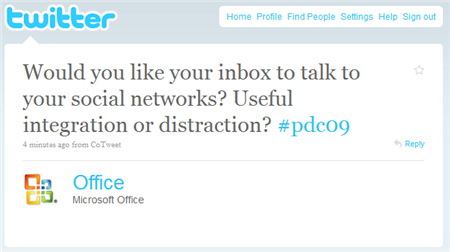 It is hash tagged with PDC09 so we might see this in a demo next week itself!

Edit: This is not the first time this info has floated there was a flutter when an alleged Microsoft Office account tweeted about twitter & Facebook integration.

I can confirm that there will definitely be some social network integration with Office 2010.

Christo27 was kind enough to share 2 screen shots with me on twitter that show “social network” integration, one with Sharepoint, though he does mention it’s not working and I’m still trying to find this option in the builds I have. Anyway, the screen shots: Check the bottom of the screen in this one, there’s where you type the status update: You can read about new features in Office 2010 here.

UPDATE: LinkedIn is the first networking site to implement this and they’ve talked about it on their blog.