A few months back Razer co-founder Min-Liang Tan visited Mumbai and showed us a few of his company’s products, he was particularly proud of the Razer Mamba. The Mamba was small in size and had two modes of operation – wired and wireless. Not two different products, but the same mouse could switch between the wired and wireless mouse mode on the fly.

According to Razer this solved two issues, the mouse could be used for regular computing in the wireless mode and as a gaming mouse in the wired mode ensuring no latency. The other issue it solved was the battery problem. Wireless mice consume battery and since the Mamba could be used as a wired mouse too, one wouldn’t be left stranding.

Microsoft has applied for a patent that brings this feature to the Xbox 360 controller. Currently, there are two controllers available – wired and wireless. The patent shows a controller that can be used in both the wired as well as wireless mode. A block diagram of the controller shown in the patent application shows the USB interface and a RF module: 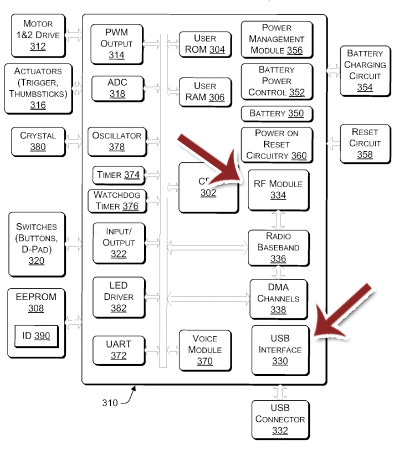 If you look closely, there is a voice module as well. The patent application refers to this as enabling oral input, though I’m not sure if this will be implemented since Kinect has voice input.

The switch from wired to wireless or vice versa would be done by saving the required controller and game settings on the controller itself. This will ensure smooth transition between the two modes.