Let’s file this one under – “Holy sweet Microsoft, why don’t you talk about this stuff?!”

Last month I wrote about how Microsoft could use Azure as a paid expansion to SkyDrive. The idea behind it was the consumer cloud offering from Microsoft could benefit by allowing users to pay more for more storage. The Android Market currently has applications powered by Rackspace.com cloud computing that offer cloud music streaming services for your all your Amazon S3 or Rackspace cloud files. One of the reasons why one might want to use Microsoft’s SkyDrive is for having their own music on the cloud.

Zune, as of now is Microsoft’s song-streaming service but with SkyDrive, a user can upload his own music and stream it on his phone. The service was rumored to be a part of Mango and now it is official. I can stream MP3 songs on my Zune from the Office Hub. Here’s a demo video I put together for you awesome folks:

As a SkyDrive user, I have run out of bandwidth before so how scalable the service is, I’m not sure. Probably the reason why Microsoft isn’t talking about it.

Update: The amazing guys at SkyDrive sent out a message on Twitter indicating that this is an unsupported feature and their focus currently is on photos and documents sync. 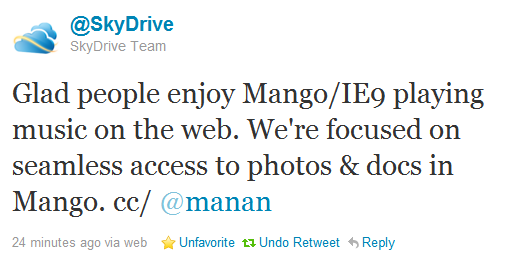