The marketing for Windows Phone (or lack thereof) is a huge problem for Microsoft. Carrier sales reps ignoring Windows Phone when customers walk into their stores, Microsoft themselves are having a difficult time getting the word out. Their promotions over at Klout and parties are a step in the right direction.

Microsoft’s partnerships with phone manufacturers is said to include a good chunk of money for marketing the devices. HTC, for the launch of TITAN ran full page ads in newspapers and a huge billboard in France (I assume those will be at other places too). Nokia, who are betting the company on Windows Phone has a lot at stake. The upcoming Nokia World event will see official launch of their Windows Phone devices. Nokia has already started their campaign for the new platform with teaser ads. The tag line is:

Today the sun will rise and set. The rest is up for grabs.

Description: Hidden away in the everyday landscape are billions of little adventures and the new Nokia with Windows Phone makes it easier to find them, to take part in them and to share them.

Nokia is currently working with ad agencies to work with this as the main concept and create campaigns around Amazing Everyday. As I explained earlier, advertising features won’t help Microsoft since, well, a feature or two more than Android or iOS doesn’t make a compelling case; focusing on how the features enable you to do more is what matters. Apple’s latest ad for Siri is simple and does exactly that. 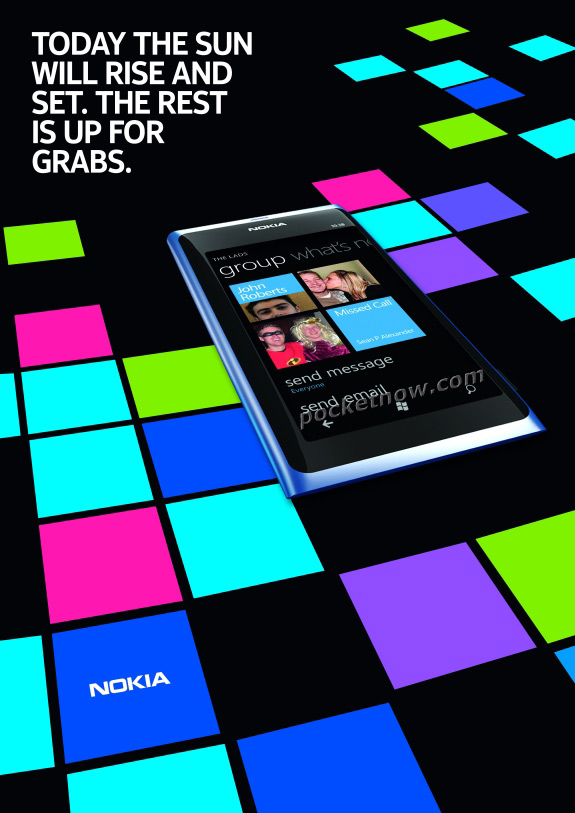