In the excitement of writing about the early prototype of Microsoft’s Tablet PC in action and the frantic setting up of a video player to embed the video I completely forgot to mention that the research team behind Microsoft Codex does in fact mention Apple’s 1987 concept Knowledge Navigator as one of the 39 ‘References’. Screenshot: 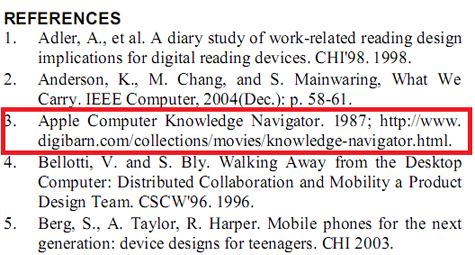 Since Business Week brought it up, I thought I’ll confirm it. Let this be some fodder for the Macboys, they’ve been feeling a bit uneasy after watching Courier’s concept video. Let me re-emphasize that there are 39 references for the project. Here are Apple’s Knowledge Navigator & Microsoft Courier.