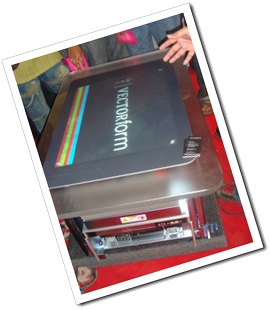 Finally after years of hearing about the grandeur of the IIT Bombay tech fest & being lazy not to go there, it took news of Microsoft Surface’s presence there to move my bum & go there. If you’re thinking as to why it was a hush hush affair & not a big media affair, let me explain.

VECTORForm, a Detroit based software developer firm makes applications for the MS Surface & it has a branch in Hyderabad. This Hyderabad branch has been making Surface applications for it’s international clients, naturally having a Surface here in India for, according to them, about a year.

Album of day 1 at the Microsoft booth

It was essentially this company which owns the Surface that was on display & was showcasing their applications in the Microsoft booth where there were 2 HP Touchsmart PCs, 1 running Windows 7 & the other Vista.

The event also clubbed a chance for students to get coupons for Dreamspark India, I will be giving away 7 coupons at my discretion, info on which will be available in subsequent posts.

The Surface on display had 2 GB RAM, Core 2 Duo. Some basic info on the Surface:

Having seen numerous videos of the Surface in action, actually using it & touching it was a different feeling altogether. Here are some more images of the Surface:

I will be going tomorrow as well. more pics & videos to follow.