Just as Apple came out with the Magic Trackpad, there were rumors that Microsoft will be releasing a competitor, that wasn’t the case to be. Microsoft’s Arc Touch is different. But based on a patent application I came across Microsoft is planning to take Apple’s Magic Trackpad and actually make it magical. And how do they plan to do it? By adding a display and some natural effects to motions.

The patent application titled Touchpad Display, explains how Microsoft researchers envision the touchpad and a display working together. An image from the application that explains some of the concepts: 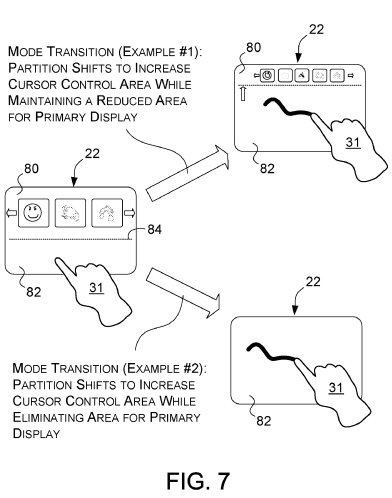 The top two images show the pad being split into a display and a touch pad, the display is adaptive based on what you are doing. The third image shows a trail after a finger motion, this is part of the project where animations are used to make the device more intuitive to human interaction. Quoting possibilities from the application:

one visual effect is a finger painting effect, in which movement of the user’s finger across the touchpad leaves a persisting trail on the surface of the touchpad.

Technically the Touchpad has two main components, the display subsystem and the pad. This different from the pressure sensitive mouse patent application I spotted earlier and will go well alongside the device charger with a display.