Why I’m Not Going To Buy The Surface RT

When Microsoft announced the Surface RT, I was excited. If Microsoft allowed pre-orders on day 1, I would’ve bought it–an impulse buy. Microsoft has priced it at $499 and every Surface ad, video or discussion involves the keyboard/cover design and how great it is. It is. But Microsoft isn’t bundling the keyboard in the $499, it’s an additional $100. For a broke student (I make less than a campus food court manager), I have to evaluate my purchases. $599+taxes is a hefty investment and the more I think about it, more I am inclined not to buy it. Here’s why: 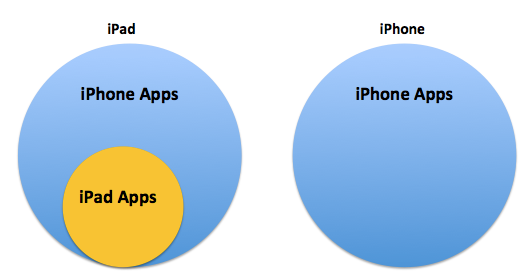 (*Pie sizes are relative, not based on factual numbers.)

iPad buyers got access to all iOS apps. Period. Apple’s mobile strategy had 1 mobile OS giving buyers access to all apps. Microsoft’s is fundamentally different. Microsoft has 2 mobile OSs–1 for the phone and 1 for the tablet.

The third reason, that I hadn’t considered so far, is the orientation of the device. Microsoft’s Surface is supposed to be used with the keyboard, that they don’t include in the base price, hence the Surface has been designed for landscape use. The logo and cameras have been positioned so. The device can be used in portrait mode but no official Microsoft video shows this orientation because it wasn’t designed to be used in portrait. The iPad is quite the opposite, it’s how the initial tablets were thought to be. It’s not a deal breaker but it just makes the device feel weird in my mind–perhaps actually playing with it on the 26th might change my mind.