Of Apple, iPhone & The Truth

My friends are well aware of my love for Apple & it’s products, yeah it’s intense! Dad recently paid $600 (~29,640 INR) for the Jesus phone aka iPhone. Before owning the iPhone there were things that I didn’t know about it and honestly things that quite surprised me considering it was an Apple product. I was gifted an iPod, though no matter how it has helped me, I still find it behind the Zune. Coming to some facts that no one will tell you about the iPhone –

The day dad bought it I read a tweet wherein Vodafone asked for 13,000 INR to fix up a fallen Sleep button, still under warranty; whatever that is. 13k for fixing a God damn button! Now, this is when I was enlightened to that, for the iPhone it’s NOT Apple that provides you after-sales service, it’s the stupid operator. Without getting into how retarded the guys at the operator help-desk are, it is surprising that Apple has out-sourced ‘collection’ of crapped up iPhones.

A pair of ear-phones, wall-charger & a USB cable. I got the ear-phones & the USB cable with the iPod too and this when I realized 2 things:

USB Cable: Take a look at these images,

Along with the iPod I got ear-phone covers, which look like this: 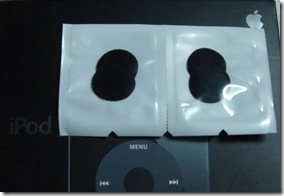 (Hey pervert, they are not condoms.)

I actually love these and surprise surprise, they ain’t shipped with the iPhone,

Take a look at the bottom end of the iPhone and you shall see 2 screws. This was a Holy Cow! moment. I searched all over the iPod and did not find a single screw starring at my face.

The battery is pathetic. It is horrible on the 3G. The damn thing doesn’t even run for 8 hours on a full charge with Wi-Fi off. Dad’s already fuming at the battery life.

Off course this post will be rubbished off by the Macboys as a rant, but they should sit back and think. The Apple logo on the cable, service not from Apple directly. Bad signs, Apple is losing it’s niche. Premium product, I don’t think so.